When I conduct conferences, it isn’t unusual to have one or two attendees who are new to the stamping die and pressworking world. Some are young new hires trying to learn about stamping, and others are individuals who have been transferred from a different department and thrown to the wolves in the stamping department.
This article is the first in a series intended to introduce beginner toolmakers, die maintenance technicians, engineers, and press technicians to stamping. The series will define a die as well as a stamping operation. It will also discuss cutting and forming operations, components and functions, and different methods used to stamping parts.

What Is a Stamping Die?

Stamping is a cold-forming operation, which means that no heat is introduced into the die or the sheet material intentionally. However, because heat is generated from friction during the cutting and forming process, stamped parts often exit the dies very hot.

Dies range in size from those used to make microelectronics, which can fit in the palm of your hand, to those that are 20 ft. square and 10 ft. thick that are used to make entire automobile body sides.

The part a stamping operation produces is called a piece part (see Figure 1). Certain dies can make more than one piece part per cycle and can cycle as fast as 1,500 cycles (strokes) per minute. Force from a press enables the die to perform. 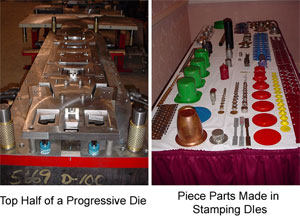 How Many Die Types Exist?

There are many kinds of stamping dies, all of which perform two basic operations—cutting, forming, or both. Manually or robotically loaded dies are referred to as line dies. Progressive and transfer dies are fully automated.

Cutting
Cutting is perhaps the most common operation performed in a stamping die. The metal is severed by placing it between two bypassing tool steel sections that have a small gap between them. This gap, or distance, is called the cutting clearance.

Very high force is needed to cut metal. The process often introduces substantial shock to the die and press. In most cutting operations, the metal is stressed to the point of failure, which produces a cut edge with a shiny portion referred to as the cut band, or shear, and a portion called the fracture zone, or break line (see Figure 2).

There are many different cutting operations, each with a special purpose. Some common operations are:
Trimming— The outer perimeter of the formed part or flat sheet metal is cut away to give the piece part the desired profile. The excess material usually is discarded as scrap (see Figure 3).
Notching—Usually associated with progressive dies, notching is a process in which a cutting operation is performed progressively on the outside of a sheet metal strip to create a given strip profile (see Figure 4).

Blanking— A dual-purpose cutting operation usually performed on a larger scale, blanking is used in operations in which the slug is saved for further pressworking. It also is used to cut finished piece parts free from the sheet metal. The profiled sheet metal slug removed from the sheet by this process is called the blank, or starting piece of sheet metal that will be cut or formed later (see Figure 5).

Piercing— Often called perforating, piercing is a metal cutting operation that produces a round, square, or special-shaped hole in flat sheet metal or a formed part. The main difference between piercing and blanking is that in blanking, the slug is used, and in piercing the slug is discarded as scrap. The cutting punch that produces the hole is called the pierce punch, and the hole the punch enters is called the matrix (see Figure 6). 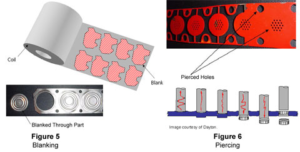 Lancing—In lancing, the metal is sliced or slit in an effort to free up metal without separating it from the strip. Lancing often is done in progressive dies to create a part carrier called a flex or stretch web.

Shearing—Shearing slices or cuts the metal along a straight line. This method commonly is used to produce rectangular and square blanks.